The high burden of property taxes in New Jersey

This is the first part in a multi-part series of posts regarding taxes and their effect on the NJ Real Estate market.

It’s no secret that New Jersey is one of the most heavily taxed states in the US. Since in New Jersey, property taxes are levied at the local level as opposed to the state or county, there is a wide variation in tax bases.

The state of NJ compiles a list of the average property tax bill for homeowners by municipalities. 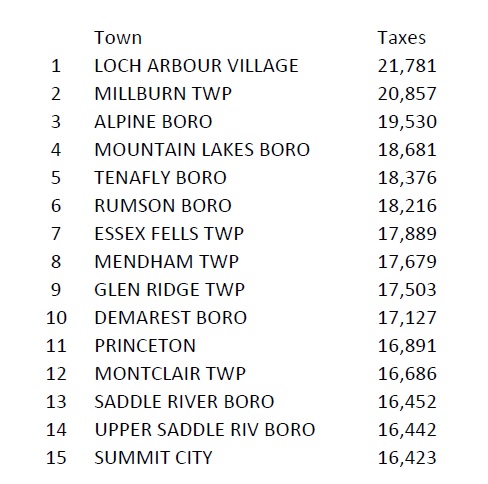 This list for the most part is a list of many of the most affluent communities in New Jersey, the types of towns where the average home is very large and expensive. Such homes will be taxed at high rates. This particular list doesn’t tell the full story though, because the median income in these communities is very high.

There is a link between taxes and real estate values. The link lies in the mortgage approval process. To qualify for a mortgage, underwriters look at the buyer’s income versus their monthly expenditures. In communities with very high monthly taxes, the tax bill itself can have a strong direct effect on the mortgage that a working class buyer can qualify for. A high tax bill soaks up a larger than normal portion of a buyer’s monthly housing payment, which in turns leaves a smaller slice in the pie for the purchase funds. In other words, a buyer may be able to afford a substantially better home with the same income in a township with lower taxes than the same buyer would be able to afford in a township with higher taxes. This should theoretically lead to lower values and other negative effects in towns which have substantially higher taxes than their neighbors.

So, to look at average taxes on its own and its effect on property values doesn’t tell the full story, because in many of the above communities, buyers will have the means to afford to pay a high tax bill.

Looking at demographics helps us get further along in the analysis and fortuately, Dr. Ernest Reock, Jr, a researcher and professor emeritus at Rutgers studied exactly that (albeit using some old data).

In his study, he determined the towns with the most correlated combination of low average income and high taxes were:

In these towns, high taxes are much more likely to have had a significant and direct effect on buyers and real estate values.

I will take a look in greater detail on how exactly this combination of high taxes and low incomes has affected the real estate markets in those communities in the next post in the series.

← The Effect of Mortgage Rates on the Central New Jersey Real Estate Market
The effect of high taxes, part 2 →