As a New Jersey appraiser, I read an article about the effects of changing mortgage rates on housing market demand in the New York Times. One of its contentions was that even a small change in interest rates has a noticeable effect on property demand. I thought it would be worthwhile to take a glance to see if that holds true for the NJ residential market.

Thanks to HSH.com, we were able to pull up the following data for central NJ.

One striking thing is the jump from 5/2013 to 7/2013 in mortgage rates. This begs the question: Did this increase in rates have a negative effect on buyers who then in turn bought homes at a slower rate?

Looking at MLS sales in Union County, NJ, one of the more populous central NJ counties, revealed the following data: 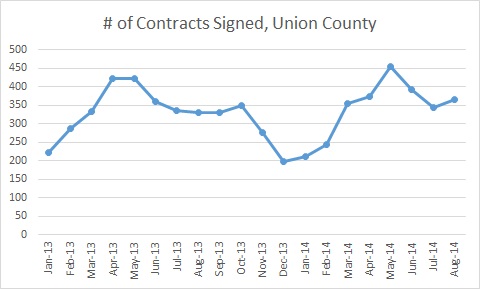 Based on this data, there was a dip in contracts signed from March to June of 2013, but apart from a normal seasonal dip in winter months, the decline did not hold, with the spring of 2014 at the new higher established rate pricing showing a relatively similar number of homes bought.

This tends to refute the contention that a small increase in rates would tend to have a negative effect on housing demand, especially in light of gradually improving market conditions, which we saw over this timeframe. Would a large increase in interest rates have a similar negligible effect? That’s hard to say but providing any change in mortgage rates is gradual and the underlying mechanics of the housing markets continue to improve, there’s no reason to expect a hard stop in the market.